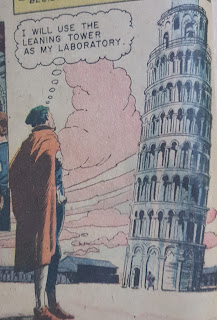 Galileo and the tower of Pisa .

After he graduated ,Galileo taught at the university of Pisa.He always taught that any idea must be proved before one accepts as truth.In 1590,he used the tower of Pisa to test Aristotle’s belief which was shared by everyone at that time regarding falling bodies.

Contrary to everyone’s belief that the heavier body will hit the ground first,the two weights struck the earth at the same time.Galileo discovered a very important principle of Physics, namely that the speed of of a falling body does not depend on its weight.

← My Life Will Go On (21) by Junior Win
TRIANGLES HAVE STRONG SHAPES by Dr.Khin Maung Win (Maths) →