While I was waiting for the result of tutor entrance exam, I sat the exam to attend the Ph.D, held in the Institute of Science and Technology. (It was the same place where ‘Rangoon Institute of Technology’ (R.I.T) where my brother once attended his engineering classes.). It so happened that the two results came out on the same day (in 1998). I passed one of them. Surely I failed again the tutor exam. 63 of 64 candidates passed the tutor exam, and they became full-time tutors.

(Why I was taught Physics here!)

In the beginning, all the candidates were taught Physics at the Ministry of Science and Technology. We were told that it was just for the time being. It went on 8 months. I hated to study Physics, which was not my subject. Those eight months was hell to me. I did not want to repeat and even to think about it. Times I passed there tortured me in every minute, and even in every second. After 8 months (I thought I would attend the Ph.D (mathematics) classes soon.) we were told that we would have to sit the entrance exam again and the previous exam we had already passed was not considered any more. We were also told that if we failed the exam, we would have to work as government servant at the Ministry of Science and Technology. (If we fail, Ph.D! No way!) Before the exam, there would have been made 2 years agreement between the candidates and the Ministry of Science and Technology. I thought it was not fair and I alone was decided to sit the exam again. I had no choice but to quit.

Before I left, I met one of Physics professors at the office. He said, ‘Are you well decided?’ I nodded. He continued, ‘Okay, if it is so, I have nothing to say more. I understand young people can do what they like. When you are older, you will understand what it means.’ If he could read my mind, he heard what I replied, ‘No, sir. If I were your age, my decision will be the same.’ I said bye to my friends, and back to home. 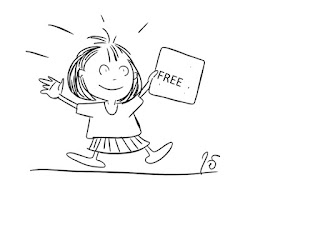 (I could not help my feeling along my returning home.) (Drawn by Maung Yit)

My heart became free like a bird able to fly from the cage. The way I returning home, everything I saw was beautiful, and lovely. However I met hard traffic, and I was in the jam-packed bus, the world seemed light and fresh. When I reached home, I told my parents, and my grandma what I had decided today. They always preferred do what I like. My mother said from now on she would never hear complains about my unhappy life from me any more. Her daughter always chat-chat whenever she came home from her study.

I now realized my fortune never give a chance to let me as a tutor in the University. My life at the University was like a fool’s paradise for more than 10 years with the hope to be a tutor.