Finally I gave up my ambition. I also was determined I would never, never do teaching for the rest of my life. My ambition was to teach as a tutor in the University, not as an outside teacher.

I cut off my friends who were working as tutors in the University. I burned and destroyed all my notebooks that I learnt hard all my University life. I also kicked out all my Burmese Traditional clothes I planned to wear when I would become a tutor in the University. All those I once treasured most have become trash. If I had not done such thing, I would have been mad, or wild. My mother was so upset what I did in front of her eyes. I just tried to comfort my boiling hatred to calm. I spent 3 to 4 years burning all my notes. It took me more years to burn all. It was not an easy task! I preferred burning my books to giving them away. No one deserved my work. 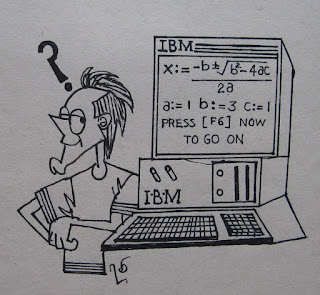 (My brother had his own work, and earned good salary. He became a computer expert. He even could give me some cash!) (Maung Yit)

Given up my ambition was not easy for me. I know my life as a writer gave me better life, but I still was too sensitive when those who long-time-no-see friends accidentally met me and asked me (sincerely!) whether I was working as a teacher in the University. I could not help to hating them. In the meantime, I saw the advertisement to apply for attending Ph.D degree from ‘Institute of Science and Technology’ again to all who had obtained the Master degree. This time the candidates had to pay school fees to attend the Ph.D classes. My brother said he would give me the school fees. My parents also encouraged me to do. (I once forgot that I had no fortune with this Education system.) I was going to sit the entrance exam. I passed the exam, and I also passed the interview. I thought this time I was sure to become the Ph.D (Maths) candidate.

On the day the school opened, I planned to pay my fees for three months advance (as they requested), and ready to attend the classes. But the Professor of Mathematics Department of the Institute of Science and Technology called me, and said that the rule just changed and they could not accept me. Not only me, all the candidates who passed the exam would not be allowed to attend because of their rule changed. I was decided I should never trust the education system any more. My fortune never gave a chance to let me as not only a tutor in the University, but also to let me continue further study. I realized I was a misfit in this Education system.

I did not want to visit the University any more. I even did not turn my head to the University whenever I passed by. My mother said, ‘I understand how you feel. You can hate, or angry. But do not hate the University, and your subject, Mathematics. You have to separate the feeling from them.’ 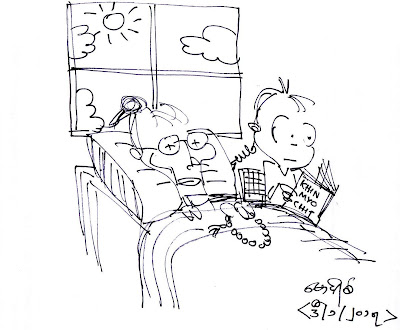 I had no other choice except looking after my grandmother who suffered arthritic pains made her spend most of her time in bed. I read many books accompanying with my grandmother. On the other hand, Reading is the only pleasure which Fate hath left me. She taught me how to read poems and she suggested which books to read.

I found that she enjoyed my writing a lot although she never showed her happiness when I started to write. I remembered my grandfather enjoyed my writing when my first article appeared. Now my grandmother encouraged me to write more while I was beside her. I thought writing was not so long as my grandmother hoped. But I never showed my thought and I pretended to be interested in writing before her. 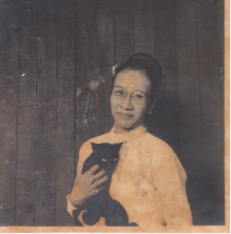 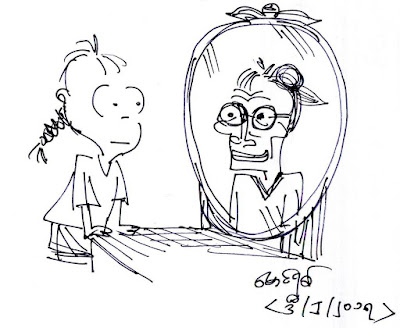 (Everyone told me I was like my grandma. Whenever my grandma heard this, she said ‘Oh! It’s a pity! If my grandchild is like me, she will be as ugly as me.’) (Illustrated by Maung Yit)

When my grandmother passed away in 2nd January 1999, I felt the legacy of knowledge she left were only treasure to me. I had many thoughts in my mind to write. As my grandma said, the more I read, the more I got material to writer. On the other hand, I had no other work but write. Baggers cannot be choosers. 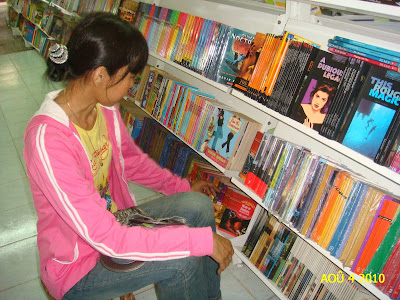 ← My Life Will Go On (27) by Junior Win
TheTaming of a Mathematician by Dr.Khin Maung Win (Maths) →