‘I write for pure love and enjoyment,

I read for pure love and enjoyment.

I never have any other aim, noble or otherwise.’

I translated my grandmother’s books (Flowers and Festivals Round the Burmese Year and Three Years under the Japs), and Alice in Wonderland (Lewis Carroll) and Introducing Camus into Burmese, because I liked them with love and enjoyment. But the people around me regard that I am a translator rather than a writer.

Sometimes I was requested to do translation. Every time I met this situation, most of the time I did not accept their offer, because I did not like the subjects. Sometimes I met misunderstanding between people and me.

Here some example; one day my friend asked me to translate some texts into Burmese, he also said that I would get a large amount of money from his company if I accepted his offer. I read the articles and I did not like it and I refused it. He was angry with me for refusing his offer. He said it was a special offer, and he wanted me to think it over again. I explained him for why I refused. I only write and translate with my pure love and enjoyment. Without enjoyment, how could I do it?

Sometimes I met same situation again, sometimes my close friends asked my help to do translation for their work. But I did not like their subjects. However I explained them, they never understood. They said I was a translator as well as a writer, and translator’s work was the same as writer’s work. They asked me how much money I wanted. They did not know why I did not want to do their work. 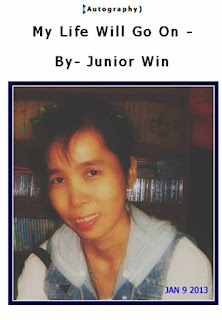 (‘My Life Will Go On’ ebook on sold at Kindle.)

Well, the time passed. I still met the different points of views between me and the people around were always evident however I was in the different world; my literary life.

I still believe ‘love and enjoyment for doing whatever what one does is the thing that influence all my work-‘ that guides me for the rest of my life.

Who has no other aim

Than love and pleasure

For reading what he reads,

Or writing what he writes.’