THE TAMING OF A MATHEMATICIAN 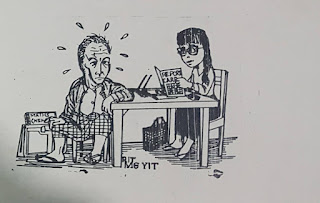 ” How good of you to come.” said my daughter’s

Maths teacher.”Didn’t expect you so soon.Please

I said”Thank you.” and sat down.

She said,”I think you have seen your daughter’s

Maths papers.It’sthe third time she has failed in

guidance she could be well above fifty.You see

your daughter in not stupid.One may even say

she’s quite bright.But she’s careless.Look how she had multiplied two and three to get five instead of six. Here she had copied twenty five

divide but the way she handles the numbers is all

”But,” I argued,”knowing what to do is the p

essential part of mathematical training ,is it not?”

The teacher replied,”What’s the use of knowing

what to do if she handles the numbers wrongly?”

I wanted to argue,but decided against it.The teacher seemed to be looking for something.Then

she found it. She said ,”Here it is .Can you imagine how your daughter had constructed a

”But,”I argued,”Is it mentioned in the question that all constructions are to be done with ruler and compass ?”

”Of course not.That’s to be understood.”

I wanted to argue, but decided against it.The

teacher added something about the way some parents trying to justify their children’s doings.

After the usual goodbyes I left. That was the

tale of the taming of a mathematician.