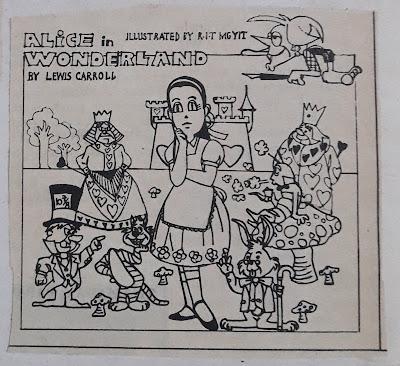 (Drawn by Maung Yit)
”Alice in Wonderland ” is a story for children .
Alice was a little girl who dreamed that she  pursued white rabbit down a rabbit hole.
There she came to a dreamland where she met with strange adventures and odd characters   like the Duchess,the Cheshire Cat, the Mad Hatter,the March Hare.the King and Queen of Hearts. And the Mock Turtle.
”Alice in Wonderland”  and ”Through the Looking  Glass” have been very popular ever since they were written.They have been thought of as children’s books. but they contain some amusing  applications of Mathematics in the field of Logic.
He wrote   16 books :  about    six for children  and about ten devoted to Mathematics and Logic. The use of the preposition ”about” is really appropriate here,because no one can tell whether  some were on mathematics or some were tales for children.
Bertrand Russell once said that Mathematics is the subject in which we never know what we are talking about nor whether what we are saying is true or false.This is clearly illustrated in the  following extract from ‘Alice in Wonderland’.
The cat said,”We’re all mad here. I’m mad. You are mad.’
”How do you know that I’m  mad ? ” asked  Alice.
”You must be or you would’nt have come here”’
Alice didn’t think that proved it at all. However, she went on.”And how do you know that you’re mad ?”
”To begin with. , a dog’s  not mad.You grant that?”
”I suppose so .”
”Well then,you  see a dog growls when it’s angry and wags its tail when it’s pleased.Now growl when I’m pleased and wag my tail when I’m angry. Therefore I’m mad.”
”I call it purring , not growling.” said Alice.
It does not take much knowledge of Mathematicss to realise, at least intuitively ,that the reasoning here is not quite  right.The real problem here is to pinpoint where  and how the fallacy lies.
In order to  follow the logical reasoning ,however false,in this passage, one has to how to differentiate between statements that may constitute hypotheses and those that are consequences. One also has to understand the use of the conjunctions, ‘or’, ‘and’, ‘implies’ and so on. The other  alternative is to forget everything about Mathematics and read it for pure pleasure, which is what I suggest.
Sometimes ,there is sound Mathematics behind what appears to be pure nonsence.For example, look at this passage.
”Let me see,” said Alice,”four times five is twelve, four times six is thirteen,and four times seven is  ……….,oh   dear,I shall never get to twenty  at this rate .”
Mathematicians have suggested at least  two explanations , one which can be understood by any layman, and the other more technical
The first explanation relies on the fact that multiplication learnt at schools at that time usually  ended  at  ”something times  twelve, ”as it did in our schooldays. We may recall for example that in the multiplication for two, one begins with
2  ×1= 2 , 2  ×2  = 4    ,and ended with    2  ×12 =24.
In case of Alice, we have  the sequence
4   ×5  =12
4  ×6 =  13
4  ×7  = 14
Let us forget for the present what we had understood regarding the meaning of of the symbol   x  .Suppose we accept the above sequence  as true and continue accordingly,
ie. in the way as suggested , we shall obtain  the  following sequence
4   ×8 = 15
4 ×  9 = 16
4  ×10 = 17
4   ×11 = 18
4 × 12 = 19
We  get       4   ×12  =  19     which is one short of      20   .That is what Alice meant when she said
.”I shall never get    to twenty at this rate.”
Another explanation is more technical. I would say ,”for the mathematician’s eyes only.”
The results   4 × 5 = 12 , 4   ×6  = 13 , 4  × 7  = 14        are true in bases   18  ,21  ,24    respectively. We may note that    18;21;24        each differ by common difference  three.
The pattern breaks down if we want the product to be twenty.
From ”the results …..”   to   ”to be twenty ”  are meant for mathematicians who know what is
meant by the ‘base’ of a number system. For a  non mathematician it is enough to know that there is a way to interpret what Alice said mathematically.
The story is told that Queen Victoria was so  delighted with ”Alice in Wonderland” that she asked for Lewis Carrol ‘s other books. Imagine her surprise when she  received  books like  Elements of Algebra, Fundamentals of Coordinate Geometry. and likewise.
You too would have a similar experience if you asked for more articles by me and someone brought you the following articles,
Applications in Metric spaces
Fundamentals of Measure Theory Banach and
Hilbert Spaces Probability  Theory    .
.