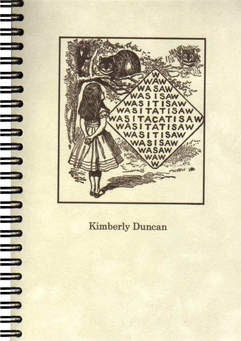 (http://www.specialbindings.com/aliceinwonderlandjournal.htm)
The following passage is from Lewis Carrol’s ‘Alice in Wonderland’.
The cat said ,”We’re all mad here.I’m mad.You are mad.’
”How do you know that I’m mad ?” asked Alice.
”You must be  or  you wouldn’t have come here.”
Alice didn’t think that proved it at all  .However she went on.
”And how do you know that you’re mad ?”
”To begin with,a dog’s not mad.You grant that?”
”I suppose so.”
”Well then,you see a dog growls when it’s angry and wags its tail when it’s pleased.
Now,I growl when I’m pleased and wag my tail when I’m angry.Therefore I’m  mad.”
In order to give a mathematical interpretation of the conversation,
I shall have to recall some of the laws  of Logic which will  be used.
They are as follows .::
(1) .All statements are either true or false but never both at
the same time.
. (2 )If a statement is not true,it is false.
. (3)If a statement is not false, it is true.
. (4) If two statements are joined by a conjunction ‘and’ ,then
the joined statement is true when both of the individual statements are true,
and false when at least one of them is false.
(5)    .If two statements are joined  by a conjunction  ‘or’ , the joined statement is true when
at least one of the individual statements is true ,and false when both the individual statements are false.
Suppose  A  and  B  are two statements.Let  ‘A  or  B  ‘ be the joined statement of A and B.   Suppose   that  ‘A  or  B ‘   is  true.Then if  A  is false,then  B has  to be true  and  if  B  is false , then   A  has to be true.
In other words, ‘if A is not true,B must be true and if B  is not  true, A  must be true.
In the conversation between the cat and Alice,the last law or formula of Logic has beeen used by the cat to prove that Alice is mad,although Alice herself does not accept it.
To be able to give a mathematical interpretation,we shall
re -write the main points of the conversation as follows.:
Cat   .  I’m  mad.You’re  mad.
Alice  .  How do you know  that  I’m mad ?
Cat    .  You must be  or you wouldn’t  come  here.
There are two statements  namely , ‘The cat is mad.’   and
‘Alice  is mad .’ The reason for ‘   Alice    is mad’ is given by
‘You must be or you wouldn’t come here.’ Re writing it mathematiclly it becomes two statements joined by ‘or’ in the following way  .
‘Alice is mad  or  Alice does not come here. ‘
According to the laws of Logic,it means that
If the statement ‘Alice does not come here ‘ is false, then the statement ‘Alice is mad ‘must me true. ‘Alice does not come here ‘ is false means that ‘Alice comes here ‘ .
Thus it means that ‘If Alice comes here,Alice is mad.’ But Alice didn’t think that proved it at all.It means  that Alice does not accept it as the proof.It is for the reader to
decide whether to accept it as the proof or not. Whether to accept or not ,
boils down  to whether to accept this statement   to be true or not .’If someone comes here ,
then he or she is mad.’  Alice does not aaccept it as true.. Do you ?
Next,let us cconsider the reasons behind the  statement ‘The cat is mad.’
The conversation may be  re written mathematically as follows.
A dog is not mad.
If the dog is angry , then the dog growls.
If the dog is pleased, then the dog wags its tail.
If the cat is pleased,then the cat growls.
If the cat is angry, then the cat wags its tail.
According  to the given laws of Logic, there is no connection between madness, being angry ,being pleased, growling  and wagging one’s tail.
So there is no valid reason ,according to the given laws of Logic,for the
cat’s madness.
We have shown how we may analyse the conversation mathematically.